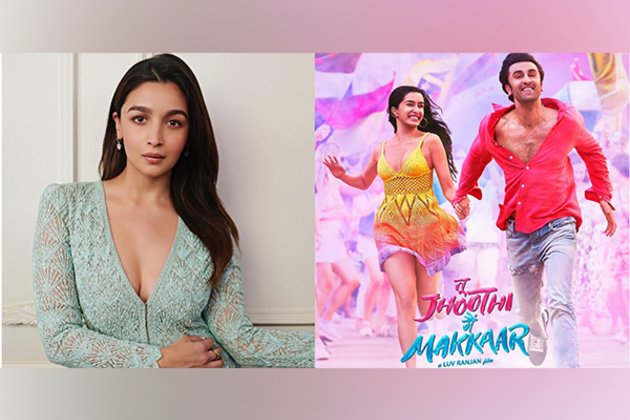 Taking to Instagram, the 'Gangubai Kathiawadi' actor shared the trailer video along with a caption, "truly one of my most favourite trailers !! Tu Jhoothi Main Makkaar releasing 8th March."The trailer of Luv Ranjan's upcoming romantic comedy 'Tu Jhoothi Main Makkaar' dropped on Monday, bringing in a breath of fresh air, with crackling chemistry between Ranbir and Shraddha Kapoor, stunning visuals and hilarious dialogues.

The three-and-a-half-minute-long trailer also gave a glimpse of the fantastic music that will be in the film with the magic of Pritam, Amitabh Bhattacharya and Arijit Singh coming together.

Shraddha took to her Instagram handle and shared the trailer with the caption, "Relationship investments are subject to love risks. Please check compatibility before investing. TuJhoothiMainMakkaarTrailer out now!"Apart from the leading duo of Ranbir and Shraddha, popular stand-up Anubhav Singh Bassi is also part of the film's cast as he is making his Bollywood debut with 'Tu Jhoothi Main Makkaar'.

At the film's trailer launch event in the early hours of Monday, director Luv Ranjan said, "Love is a complicated subject, but why not have some fun while we try and unravel relationships in today's world. The world and vibe of the film has been brought alive by the super talented pair of Shraddha and Ranbir and my brilliant crew. I am hoping for audiences across all ages, young and young at heart to have a good time in the theatres while they relate to their own romance when they watch the film."The film marks the first on-screen collaboration between Ranbir and Shraddha. Produced by Luv Films' Luv Ranjan and Ankur Garg, and presented by T-Series' Gulshan Kumar and Bhushan Kumar, 'Tu Jhoothi Main Makkaar' will release in theatres on Holi i.e. March 8. (ANI)